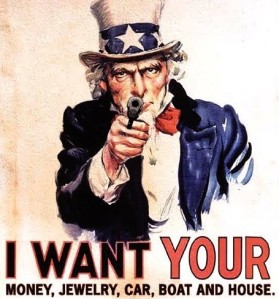 A question that’s always in the back of my mind is will there be a day in America’s future that private property no longer exists? Ultimately, will the state so encroach on our freedoms that we forfeit our inalienable right to free will and become property of the State?

Asset forfeiture has been on my mind since I saw it happen locally and I’ve been doing some research into the matter. Recently there was a case in the news in which a Pennsylvania family lost their $350,000 home to civil forfeiture when the police caught their teenage son selling $40 worth of heroin at a separate location not on their property. For months they fought it, back and forth. They had no knowledge of their son’s activities let alone any participation in illegal activity and yet the police had the authority to come and take their private property. Not until they contacted the Institute for Justice did they finally get their property back. If you find yourself involved with civil forfeiture keep the Institute for Justice in mind!

There was also a neighbor of ours that was forced to evacuate his home while police went in and destroyed his property making it uninhabitable even though they never found any evidence of illegal activity. They had no evidence, they had no charges, they had no conviction and before the passage of SF 874 in Minnesota they didn’t have to. There was also an acquaintance that was followed by the Metro Gang Strike Force of Minnesota, disbanded in 2009 for corruption including counting on seized drug dealer money to fund the force after legislators slimmed down state funding, sloppy record keeping and lax financial controls pointing towards fraud and embezzlement. Ultimately a settlement awarded 96 victims $840,000 and returned some of their property. The outrage spurred lawmakers to pass a law requiring forfeiture reporting. The resulting data was later used by IJ in its “Stacked Deck” report. In turn, that research helped catalyze the passage of SF 874. The acquaintance I know had half a million dollars seized and ended up only getting back $5,000. 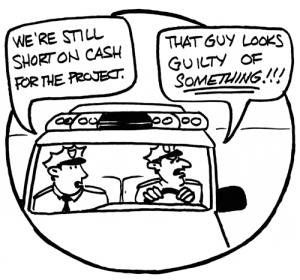 Here’s how civil asset forfeiture works. It’s a legal tool that allows law enforcement officials to seize property that they assert has been involved in certain criminal activity. In fact, the owner of the property doesn’t even need to be guilty of a crime: Civil asset forfeiture proceedings charge the property itself with involvement in a crime. This means that police can seize your car, home, money, or valuables without ever having to charge you with a crime. It came into more feverish use with the institution of the ‘war on drugs’. There are many stories of innocent people being stripped of their money and property by law enforcement. Also, if an owner wants to get their property back, they have to prove their property was not the instrument or proceeds of the charged drug crime.  Owners have to prove a negative in civil court. Being acquitted of the drug charge in criminal court does not matter to the forfeiture case in civil court. In other words, your property is guilty until proven innocent even if you’ve been proven innocent in criminal court. It is disconcerting that a person has more legal right and protection in a criminal case than a civil case after all in a criminal case you are innocent until proven guilty and you’re provided with an attorney if you cannot afford one.

In Minnesota, not only was there an appalling lack of due process for civil forfeiture proceedings, law enforcement can keep up to 90 percent of the proceeds from forfeited property. That clearly creates a perverse incentive to police for profit. A report by the Institute for Justice found that forfeiture revenue grew by 75 percent from 2003 to 2010, earning police almost $30 million. In 2012 alone, there were 6,851 property seizures that amounted to $6.7 million according to the state auditor’s office. This growth occurred despite the fact that the crime rate was actually dropping in the Land of 10,000 Lakes. Last fall, 2014, Governor Dayton of Minnesota signed into law bill SF 874 that rewrites civil forfeiture law so that now the government can only take property if it obtains a criminal conviction or its equivalent, like if a property owner pleads guilty to a crime or becomes an informant. The bill also shifts the burden of proof onto the government, where it rightfully belongs.

You may think this only happens to guilty people who deserve it, right? After all, this is America and if the police are seizing property it must be for good reason, right? While, for any good society to work we must depend on the police force to maintain justice the police force is not immune to corruption and checks and balances must be in place to monitor their activities. Anywhere there are people there is a temptation for corruption. Civil asset forfeiture profoundly affects the poor since their livelihood desperately depends on the assets that are taken and they can’t afford to be tied up in legal proceedings.

I am personally thankful for the passage of this bill, for the Institute for Justice, and for the whistle blowers that chose not to abet further corruption. I thoroughly stand by the concept of ‘innocent until proven guilty’ as the tenet of our justice system especially if the person in question is cooperative with the investigation.

What does this say about encroachment of the State? If you’re a person that believes in freedom, the pursuit of private property, due process, innocence until proof of guilt you should have a HUGE problem with this. Loss of freedom always happens slowly and often under the good intention of social justice and security. Your material property is only the beginning, soon it’s your ability to make choices; your free will.  I am suggesting a renewed interest in checks and balances and a strengthening of our foundational principles. If we forget our inception we’re bound to regress.

The government was once an institute that protected your freedom against the trespassing of other people. More and more it seems that the government is taking your freedoms for ‘your own good’. This is defined as Hard Paternalism (there is also Soft Paternalism which is the passive-aggressive little sister of Hard Paternalism, be wary of both). For example, seat belt and helmet laws negotiated by insurance companies, seizing your earned income for redistribution programs such as welfare, mandatory retirement savings, swim restriction in public waters because there is no life guard on duty, mandatory curfews, etc. Paternalism is objectionable because it violates what the philosopher Immanuel Kant called the equal “dignity” of all human beings. Respect for human dignity implies respect for people’s ability to think and choose for themselves. Paternalism, however, imposes choices based on what someone else thinks is good for a person.

People who are interfered with are not treated as equals capable of making their own choices, Kant claims, but are treated as means to someone else’s view of what their choices should be, “like immature children unable to distinguish between what is truly useful or harmful to them.”

John Stuart Mill’s warns in his essay “On Liberty”: “He who lets the world . . . choose his plan of life for him, has no need of any other faculty than the ape-like one of imitation.” By contrast, the free individual must possess reason and judgment to make his own decisions, “and when he has decided, firmness and self-control to hold to his deliberate decision.”

When we forfeit our individual freedoms for ‘our own good’, it soon follows that the State and all it’s agencies will spread their authority further seizing your property and your freedoms under an ever expanding definition of what’s for our good. The bigger the government, the smaller the citizen. Will the citizen, someday, be so small they vanish?

Civil Asset Forfeiture: The encroachment of the State

One thought on “Civil Asset Forfeiture: The encroachment of the State”